← more from
Far Out Recordings 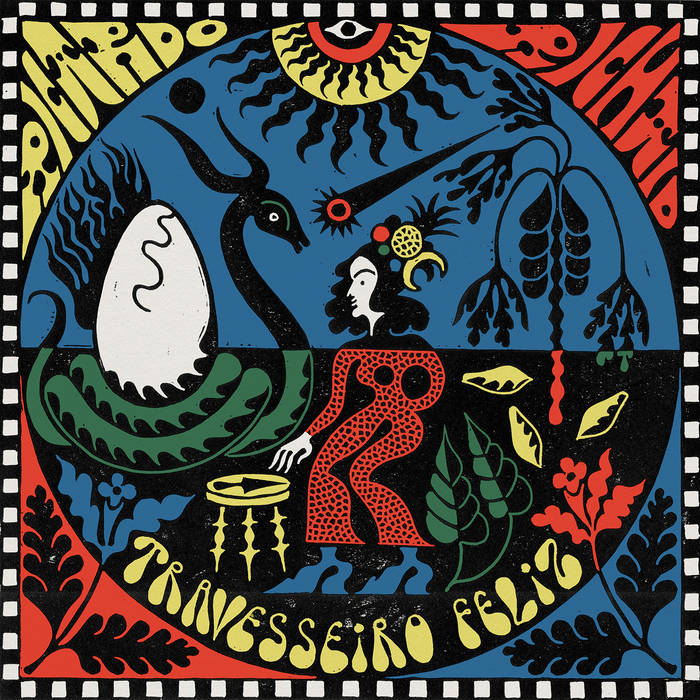 donovan_godfrey Just what the Dr. ordered for being quarantined and moderately stressed out. Nice vibes to help me disconnect a bit. Far Out never misses. Hope to hear more from Ricardo!

On his debut album Travesseiro Feliz (Happy Pillow), Rio de Janeiro based dreamer and new Far Out Recordings signing Ricardo Richaid melds his tropical heritage with his love for psychedelic music, jazz and rock. He also takes inspiration from the many Brazilian greats – Caetano Veloso, Arthur Verocai, Ivan Lins, Joyce, Hermeto Pascoal, Marcos Valle and Azymuth (to name a few) – who he has worked with as an engineer, assistant and producer, in Rio’s former RCA studio, Cia dos Tecnicos.

As well as being heavily influenced by Brazil’s fabled Tropicalia movement, Richaid is the grandson of Brazilian actor, singer and Disney star Aurora Miranda (Carmen Miranda’s younger sister), so tropicalism is in his blood. Describing his sound as ‘Industrial Tropicalism’, Richaid’s music is undoubtedly a product of his environment. Just like Rio, it’s warm, hazy and beautiful. But reflecting the current mood of his homeland, there’s an ominous smog looming amongst its charm. Lamenting the political, economic and ecological crisis he sees engulfing Brazil, Richaid’s obscure, poetic lyrics touch on drugs, drones and darkness, emphasizing the importance of art to bring light in troubled times.

The unconventional time signatures and sunny jazz-folk meets post-punk aesthetic are adorned by Richaid’s studio smarts. Working day to day in Rio’s top studios, he developed a comprehensive knowledge of all aspects of the recording process. But seeking autonomy and total creative independence, Richaid went on an equipment finding mission in the USA. Upon returning, he set to work building his own studio in Rio’s Gavea district and began writing the tracks that would become Travesserio Feliz. Singlehandedly composing, producing and mixing everything himself, Richaid recalls the endless nights he spent working on the album, often sleeping on the studio floor.

Travisseiro Feliz features a host of notable names from across Rio’s music spectrum, including percussion sensation Marcos Suzano (Gilberto Gil), experimental pop-rock artist Ana Frango Eletrico, and vocalist and multi-instrumentalist Jose Ibarra, who has been lauded for his recent performances as part of Milton Nascimento’s touring group. On interlude track ‘Formigas’ we also hear a few verses of Ricardo singing together with his 7-year-old daughter, Nina Richaid.

Living with his grandmother Aurora Miranda until the age of seventeen (who featured in Walt Disney’s Three Caballeros film, and happens to be the first human being to kiss Donald Duck… really!), young Ricardo would listen with intrigue to his father playing chromatic scales and bossa nova melodies on the saxophone; his mother’s Brazilian classical piano; or his punk rock brother slamming the drums. This eclectic musical upbringing led a teenage Ricardo to learning his trade as the bassist in a short-lived hard rock band, which disbanded when Ricardo began to dig deeper discovering the likes of Os Mutantes, King Crimson, Frank Zappa and especially the ‘Clube De Esquina’ sound pioneered by Milton Nascimento and Lo Borges. Since then, alongside engineering some of his musical heroes in Brazil, Richaid has played in bands like Mara Rúbia and nitú, from Rio’s underground experimental psych and jazz scenes.

Following lead single ‘Largado Nu’ on the 17th January, Richaid will release his debut album Travessiero Feliz on limited vinyl, CD, cassette and digitally in March 2020, via Far Out Recordings.

Recorded and produced by Ricardo Richaid.
Mix and Master by Pedro Richaid

Rio based dreamer and new Far Out Recordings signing Ricardo Richaid melds his tropical heritage with his love for psychedelic music, jazz and rock. He also takes inspiration from the many Brazilian greats – Caetano Veloso, Arthur Verocai, Joyce, Hermeto Pascoal and Marcos Valle (to name a few) – who he has worked with as an engineer, assistant and producer in Rio’s top studios ... more

Bandcamp Daily  your guide to the world of Bandcamp